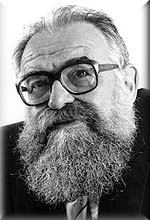 Harav Yehuda Amital was born in 1924 to Yekutiel Ze’ev and Devora Klein, of blessed memory, in Transylvania. He studied Torah in Cheder and Yeshiva, and had virtually no formal secular education. In 1944, with the Nazi invasion of Hungary, he was taken to a labor camp, while his entire family - parents, sister and brother - were taken to Auschwitz where they were murdered. After his liberation, he arrived in Eretz Yisrael at the end of 1944, on Chanuka 5705.

When he arrived in Israel, Rav Amital continued his yeshiva studies at the Hevron Yeshiva in Jerusalem and received Semikha from Harav Isser Zalman Meltzer zt”l. He also studied under Harav Yaakov Moshe Charlap zt”l. While in yeshiva, he joined the Haganah. The following year he married Miriam Meltzer, daughter of the Chief Rabbi of Rehovot and granddaughter of Rav Meltzer. Rav Amital fought in the War of Independence, in the battles of Latrun and the Galilee. After the war HaRav Amital became a Safra de-Dayna(rabbinic secretary) in the Rabbinical Court in Rehovot and two years later, he became a Ram (instructor) in Yeshivat HaDarom.

Rav Amital predicted that the phenomenon of Yeshiva students being exempted from army service would increase the friction between the religious and secular community, on the one hand, and would lead to emotional and ideological distance between the Yeshiva students and the State of Israel, on the other. He also felt that the Religious Zionist community needed to have its own institutions of high level Torah study.  He therefore helped formulate the idea of Yeshivot Hesder, and took an active role developing the first hesdergroup at Yeshivat HaDarom.

After the Six Day War, he was called upon by Mr. Moshe Moskovic - a survivor of the 1948 battle for Gush Etzion - to found a Yeshivat Hesder in Gush Etzion. In 1968, the Yeshiva opened in Kfar Etzion, not far from the settlement of Alon Shevut of today, with 30 students.  It has since grown into an institution with hundreds of students from Israel and abroad, a women’s division in Migdal Oz, and a renowned teacher’s college.

At the yeshiva’s inception, Harav Amital turned to Harav Aharon Lichtenstein with the request that he join him as Rosh Yeshiva, and in 1971 Harav Lichtenstein agreed. Their joint leadership resulted in the unique development of the Yeshiva and to its profound spiritual influence in Israel and abroad. As exemplified by its leaders, the yeshiva is open to a variety of opinions and approaches. Harav Amital insisted that the yeshiva, while maintaining a staunch commitment to Torah study and mitzva observance, be “built with windows,” sensitive to the needs of the outside world, listening to “hear the baby’s cry.”

For many years Harav Amital represented Yeshivot Hesder in the Army network, holding the rank of Captain in the Armored Corps.

A prominent public figure in Israel, with abroad impact on matters of religious and national concern, Harav Amital founded the Meimad movement in the 1980’s in order to give voice to the moderate camp within Religious Zionism and to preserve avenues of communication with the broader public.  After the assassination of Prime Minister Rabin z”l in 1995, he was asked by Prime Minister Shimon Peres to join the government as Minister without Portfolio in order to bridge the growing divide between the religious and secular populations in Israel.

Harav Amital returned to the yeshiva in 1996 and, upon reaching the age of 80, requested that the yeshiva select his successors before his retirement, so as to avoid conflict or confusion.  Harav Yaakov Medan and Harav Baruch Gigi were appointed roshei yeshiva alongside Harav Amital andHarav Lichtenstein in 2006.  Harav Amital formally retired in October 2008, and Harav Mosheh Lichtenstein assumed his duties as the fourth rosh yeshiva.

Harav Amital passed away at the age of 85 on the 27th of Tamuz, 5770 (2010), and was mourned by thousands of students and admirers.  He is survived by his wife of over 60 years, Rabbanit Miriam Amital, as well as their five children (all of whom are involved, together with their spouses, in Torah education in Israel), and many grandchildren and great-grandchildren.  Yeshivat Har Etzion, the institution he founded and guided for over four decades, will always remain his great legacy to Am Yisrael.

To read Harav Amital’s articles in English, see here.  The subjects include:

·         Commitment and Complexity: Jewish Wisdom in an Age of Upheaval (order here); in Hebrew, קול יהודה.

·         A World Built, Destroyed and Rebuilt: Rabbi Yehuda Amital’s Confrontation with the Memory of the Holocaust, by Moshe Maya (order here); chapters from this book can be found here and here; in Hebrew, עולם בנוי וחרב ובנוי (order here)

Your support makes a difference